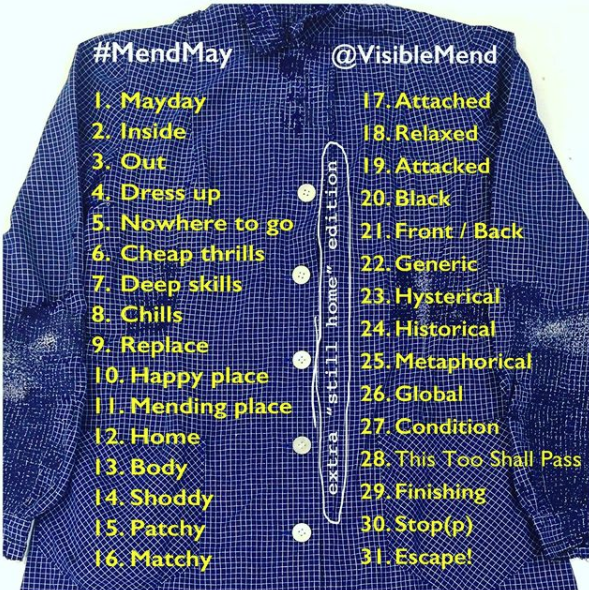 By popular demand, Kate of @visibleMend is doing a second month of mending prompts!

YAY!
After an April full of Stitching the World, I'm ready to get back to my mending.

I'm quite taken with the Tactile accountability chart that I created for Ali Edwards' One Little Word project:
I'm going to do something similar this month, maybe with fabric swatches?
Or do I do a "soft" version? I'll find out tomorrow! Heh.
I'll be posting my daily mending antics on Instagram @annembray, if you're curious.

I've been using the COVID-19 stay-at-home mandate as a stay-at-home art retreat.
For me, couldn't have come at a better time!

Three things I've been working on:
Stitching the World
My massive embroidery project. Dare I say my stitching is near completion? I've been showing the details, country by country, during the A-Z Blogging Challenge over on my Pattern Blog. Go check it out!
Better yet, answer the Four Questions for Stitching the World 2!
Detritus Paper Weavings
I've been doing these on and off since January 2019. Originally, I was using reject printouts from the money job. Now that I'm working-from-home, I'm using ephemera at hand. This is a set done with junk mail and a random Chinese medicine book: 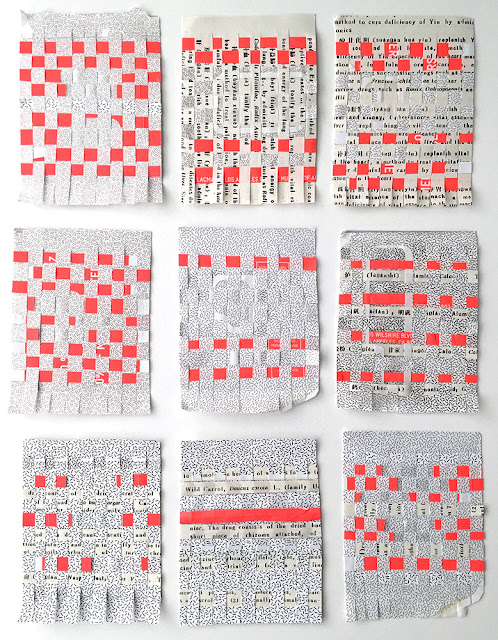 
Introducing: Call and Response v2 with @izzoimages Day 7 The project premise: Artist no1 will create a piece of art within 24 hours and send a digital version of it to Artist no2. This can be anything. It can be poetry, it can be photography or video. It can be painting or drawing, collage or sculpture. It is about sitting down and being creative and interacting with someone. Artist no2 will then have 24 hours to create a response to it in any medium and with any tools available to them. They will in turn send a digital version of it back to Artist no1 who will create a new work in response. There can be up to 28 pieces to your collaboration. And that is ok!! “Call and Response” is a project organized by Kristine Schomaker and her team at Shoebox PR: Sheli Silverio, Emily Wiseman, Susan T Kurland and S. Vollie Osborn @shoebox_pr @artandcakela @kristineschomaker #shoeboxcallandresponse #collaborationatadistance #annembray #isolationcreation
A post shared by anne m bray (@annembray.art) on Apr 23, 2020 at 9:54pm PDT


This is a COVID project dreamed up by Kristine Schomaker and her team at Shoebox PR. I'm in the middle of Round 2 and have signed up for Round 3. Here is a link to all the projects from Round 1.

I just signed up for an online weaving course with Brittany McLaughlin.
Tactile adventures await! 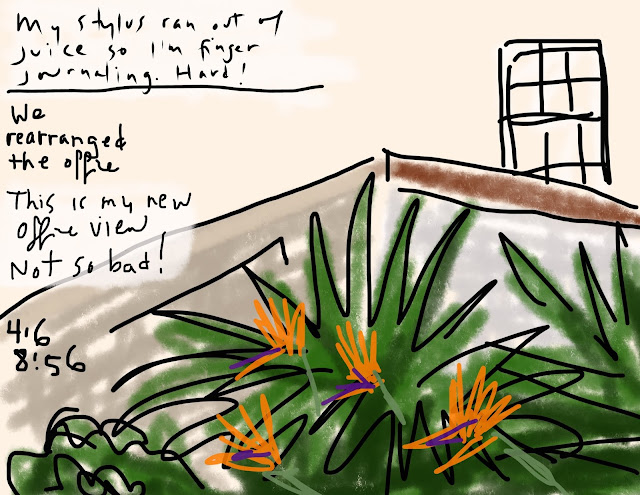 Text:
My stylus ran out of juice so I'm finger journaling. Hard!

We rearranged the office
This is my new office view
Not so bad!
Posted by Anne M Bray at 9:00 AM 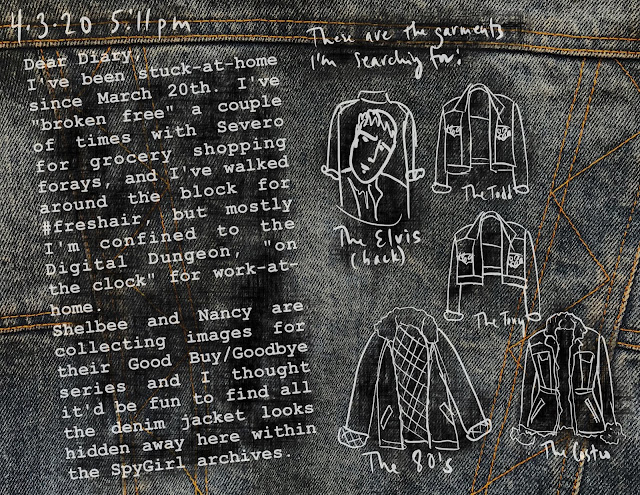 Dear Diary,
I've been stuck-at-home since March 20th. I've "broken free" a couple of times with Severo for grocery shopping forays, and I've walked around the block for #freshair, but mostly I'm confined to the Digital Dungeon, "on the clock" for work-at-home.
Shelbee and Nancy are collecting images for their Good Buy/Goodbye series and I thought it'd be fun to find all the denim jacket looks hidden away here within the SpyGirl archives. 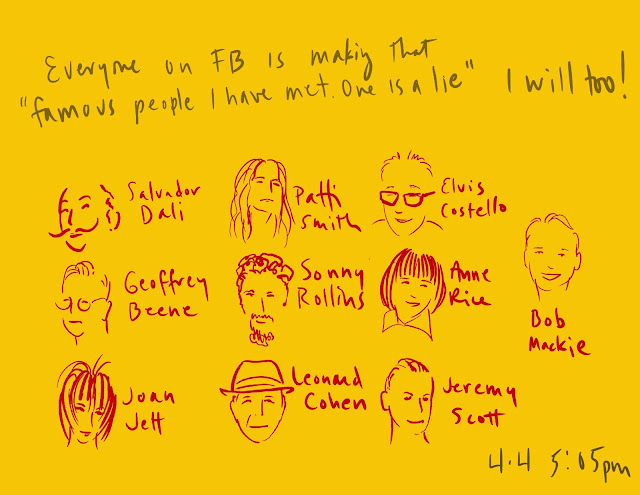 Salvador Dali
Ugh! Dirty old man! He pinched my butt.
When I was a junior in high school, I interned at Knoedler Gallery on 70th between 5th and Madison in NYC. They had bought the next door brownstone and during renovation, had an environmental installation set up by Salvador Dali and Andy Warhol. The opening reception was quite a scene! All of Andy's Factory denizens attended.

Geoffrey Beene
Richard Lambertson introduced me after a Beene benefit show (in Beverly Hills?). Backstage. Amongst the Glamazons.

Joan Jett
Such a sweetheart! Met her after her gig at the Nike event at the Colosseum (2005). We hung out at the Standard rooftop downtown. Severo knows her road manager. Some kind of Smithereens/Jersey connection.

Patti Smith
I love Patti. She brought me to tears at a free concert in Waterloo Park during SXSW 2000 during "People Have the Power".
The Smithereens shared the bill with her at  __ in 2011. I had my book signed.

Sonny Rollins
I sold Sonny a birthday cake when I worked at Cake Masters, NYC in 1977. I think it was the 72nd Street location, but not sure.

Leonard Cohen
Rafael, one of Severo's oldest friends, was Leonard's drummer for his final world-wide tour that I think lasted for three years. I was able to go to full band rehearsals at SIR in Hollywood twice -- AMAZING! I took Rafael a jar of my homemade raspberry jam. He gave it to Leonard, who opened it up, stuck his finger in, tasted, and said, "Anne, this jam is sublime."

Elvis Costello
Elvis is Severo's god. He befriended Elvis's road manager (sense a trend here?) and we went back stage many times. I met Elvis once. The other times I sat back on the green room couches while Severo paid homage. Too much standing around waiting to talk to The Man.

Anne Rice
She signed one of her Vampire books for me at Vroman's in Pasadena.

Bob Mackie
Bob is a huge supporter of Otis College of Art and Design, where I occasionally teach. He has mentored many Fashion projects. I met him at one of the Scholarship Benefit Fashion Shows.

Jeremy Scott
I did not formally meet Jeremy. I saw him in the hallway at Otis when the Fashion Department had their campus in the CalMart in downtown LA. He was wearing a Mexican poncho and looked like a 70's surfer. I highly recommend his film bio on Netflix: https://www.netflix.com/title/80064521 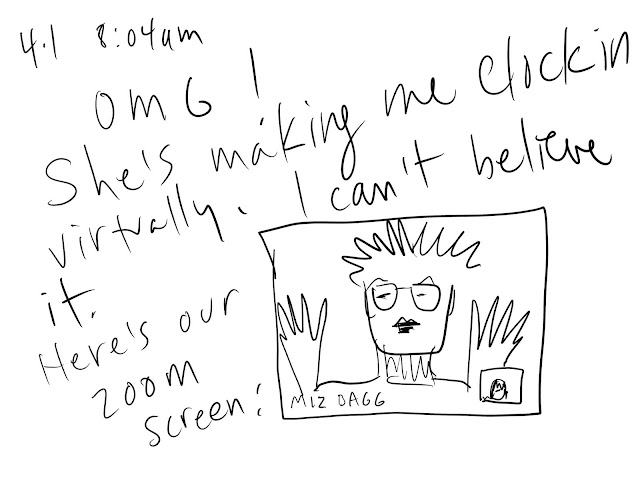 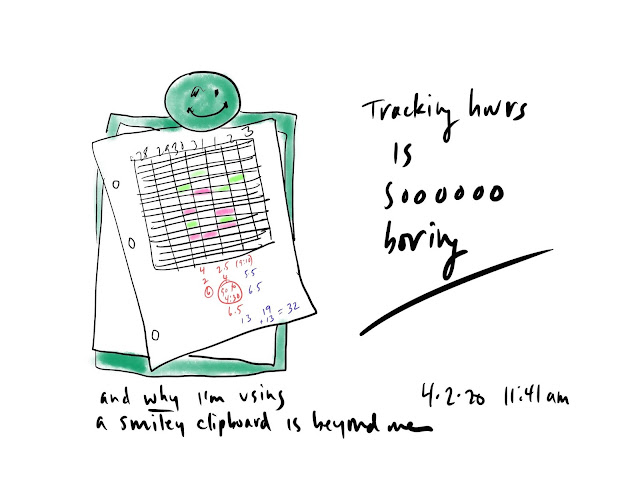