I donned all the Rainbow Things: 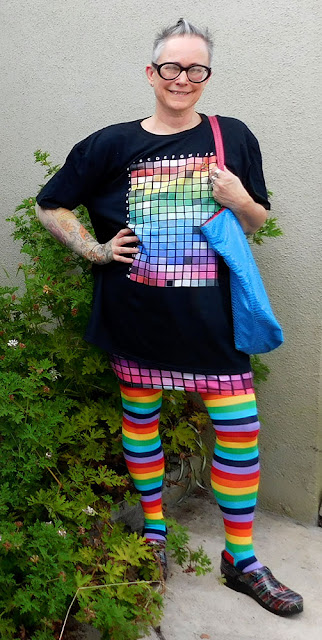 And went over to bG Gallery to hear a talk by Lynn Segerblom aka Faerie Argyle Rainbow, the woman involved with the creation of the original Rainbow Flags flown for the 1978 Gay Freedom Day Parade in San Francisco. 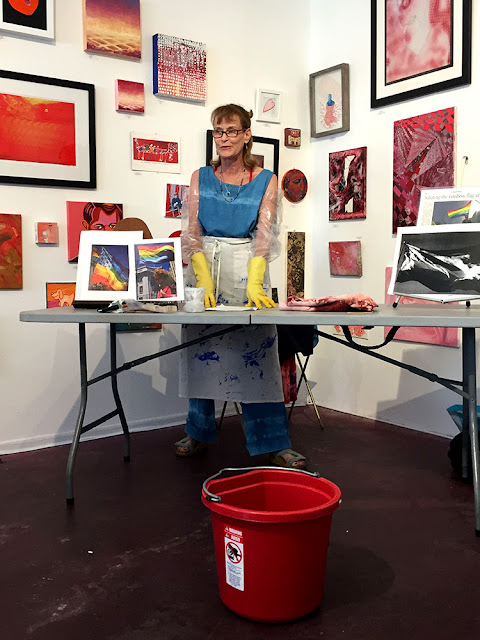 The rainbow theme is carried throughout bG Gallery, with the sixth annual Spectrum Gestalt exhibition, up until July 6, 2019. The salon-style group show of 80 artists has the art arranged chromatically. View the artworks here.

Linking up with
Patti's Visible Monday
Shelbee's Spread the Kindness
Catherine's #iwillwearwhatilike
Posted by Anne M Bray at 8:05 AM

What I Did On My Summer Vacation

Remember doing those summer vacation reports in grade school? Me neither.

I'm doing this more for me than for you. I'll be writing more detailed posts on my various blogs. This is functioning as my Table of Contents and link center (adding links as posts are written). You're welcome to come along for the ride!

LAX - BOS
I mended (until I dropped my seam ripper under my seat) and sketched. 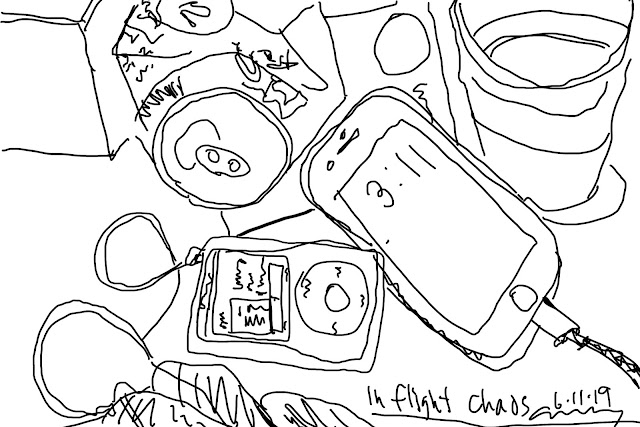 Getting from Boston to Providence was an adventure. More on that later.

Providence
A short and wonderful visit with Patucci and Mark, including perusing the Repair and Design Futures at the RISD Museum [museum link] (closes 6/30/19)
My long post about it link.


RISD Museum: Repair and Design Futures through 6/30/19 This is text from the exhibition. #mendingmatters #slowsewing #slowstitching #mending #mendingasmetaphor
A post shared by anne m bray (@annembray) on Jun 13, 2019 at 1:57am PDT

A few tense moments chasing the box of art, which I picked up at the Post Office as I was leaving town: 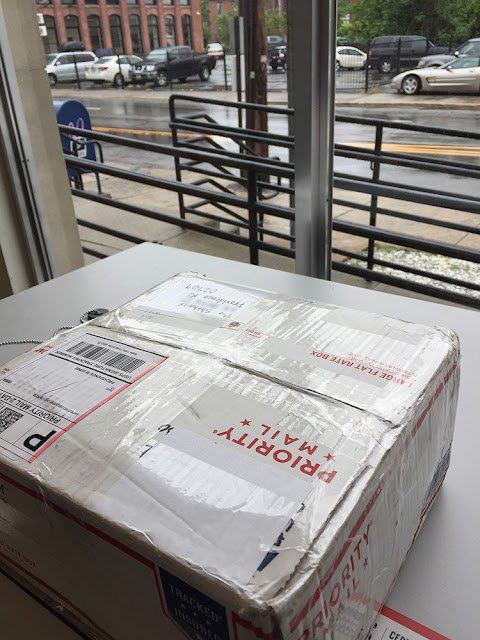 Vermont
Rendezvoused with Annie at her sweet cabin. 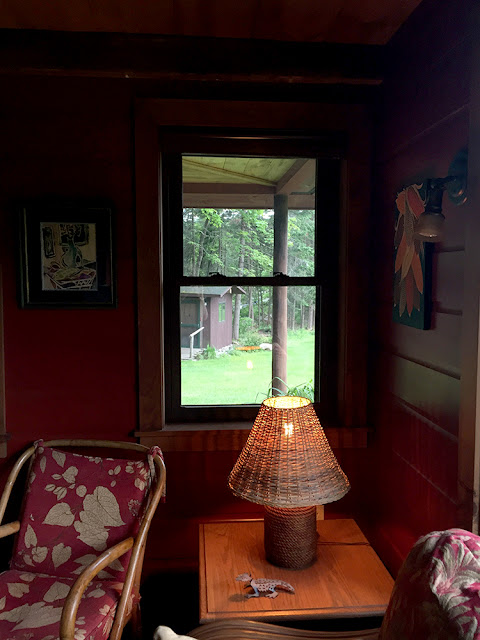 Troy, NY
As mentioned, 45th reunion. A small, yet mighty gathering of the class of '74 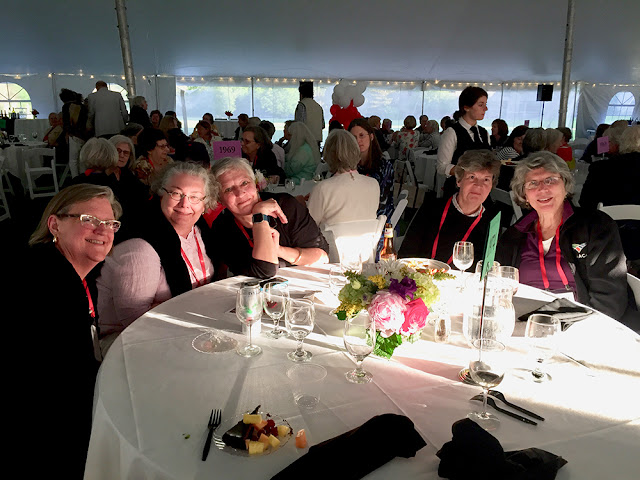 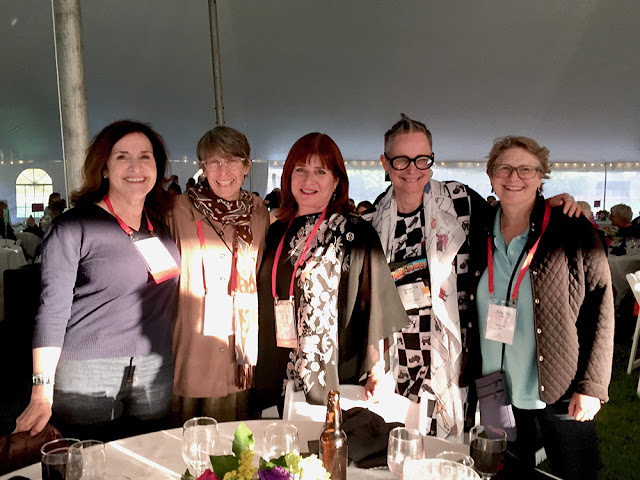 Severo showed up Saturday night and he joined us for the Class Dinner:

Barneveld, NY
A few days at Mom's, plus museum visits.
It seemed that every time we were in transit, it rained. The drive from Barneveld to Newark was especially harrowing -- Severo almost hit a deer on US17, a six lane highway.

NYC
William Greenberg Desserts, the Met, shopping -- an ideal day in the city. Have a vacation planned? Summer at home? Link!

I just returned home from a wonderful two week trip East.
Many, many different meetups and museums -- eventually I hope to write about them all.

Today, it's all about The Dress and its debut at Fluevog Manhattan:
I posed with the Investigator, as it's one of the styles sketched in the repeat.
To commemorate this auspicious occasion, I (finally) made an individual Investigator sketch that's available on Redbubble (I get a commission for purchases):
In addition, I wore The Dress yesterday to an event that I chauffeured Ruth to in Pasadena.
Don't forget -- I've got a Summer-long Link-up Party happening.
Link as much as you'd like. The more the merrier.

A Road Trip into the Past

I did something crazy this weekend. No, I mean outside the box CRAZY, not my normal crazy.
I drove 300 miles chauffeuring an old friend and his dad to a school reunion in Ojai.
If you follow my socials, you've seen bits and pieces of the trip.
Here it is, all in one place, with some context. Beware, it's a long, convoluted journey blog post! 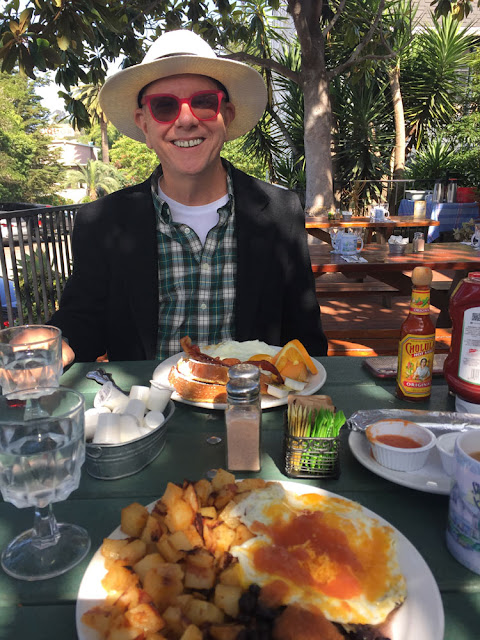 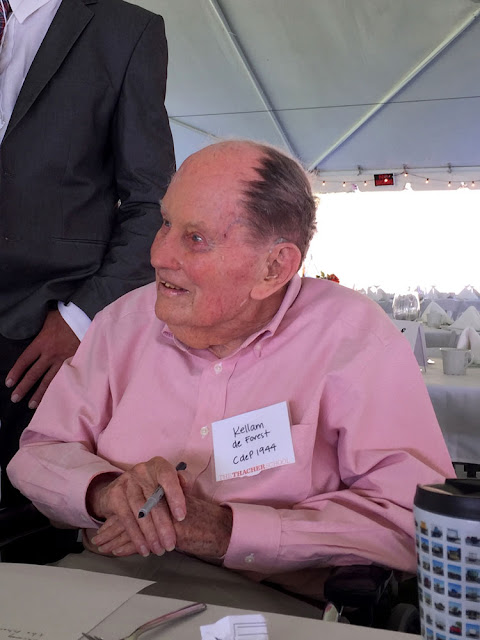 It was Kellam's 75th school reunion at Thacher School, in Ojai. He wanted to attend.
Carmaig lives in Seattle and was able to fly down to help him get there.
"But what about transport?" pondered Carmaig. "Rent a car? Oh wait, there's Anne, she might do it!"
Indeed I did.

Kellam is the son of Lockwood de Forest Jr, who was a landscape architect well known in Santa Barbara.
Lockwood was the son of Lockwood de Forest, an artist and designer, who knew my Great Great Uncle Howard Russell Butler. Both of them held painter Frederick Church as a mentor. (An interesting coincidence, both of their sons became landscape architects, one in Santa Barbara, one in Princeton, NJ).

After picking up Carmaig in Pacific Palisades, we drove up PCH, making our way to Santa Barbara to fetch Kellam. Before heading to Ojai, we took a detour to the de Forest property on Todos Santos Lane.  < Click on that link -- it's historical info about the property.
The current owner has made significant changes to the interior of the home (and why the house was completely open with no workers on site was a bit disconcerting to this Los Angelina). The gardens have been neglected, but there are traces of its former glory.
On to Ojai. But first some more history. Scroll down to the next photo if I'm boring you.
We took CA150, the twisty route that I used to take to Thacher when I was going to College of Creative Studies at UC Santa Barbara. You see, my senior year at Emma Willard (in Troy, NY), 30 Thacher Juniors (boys) came to our school (girls) on an exchange program. THAT was a bit wild, for both sides of the equation! I became good buddies with Carmaig and Harrison. When I narrowed down my college choices to either Nova Scotia College of Art and Design or CCS, I chose California. It was 3000 miles away from my family (a good thing, in my adolescent mind) and I at least had some friends within range. I knew no one in Halifax.
My apartment that I ended up renting in Isla Vista was horribly depressing (a 60's era motel mid-conversion into apartments. Mine was still a motel room). Almost every weekend that first fall quarter, I was up at Thacher, staying with a faculty member, and hanging out with Harrison and Carmaig. But by spring '75, I had finally made some friends at UCSB and had "moved on" in the boyfriend department (I performed one of those awful restaurant breakups with Harrison. Sorry, Harrison). I lost touch with the Thacher boys.
Fast forward 20 years.
I reconnected with Carmaig in the late '90s -- he was now a singer-songwriter doing solo performances on the ukulele. Severo and I saw him at The Knitting Factory in Hollywood, and get this -- Severo knew Carmaig too! He had played with Carmaig! (The connections are getting pretty tangled, right?) We became Facebook friends, kept the reconnection alive, and in 2015 I did a de Forest road trip, accompanying Carmaig from LA to Seattle. You can read about that look at art from it here. 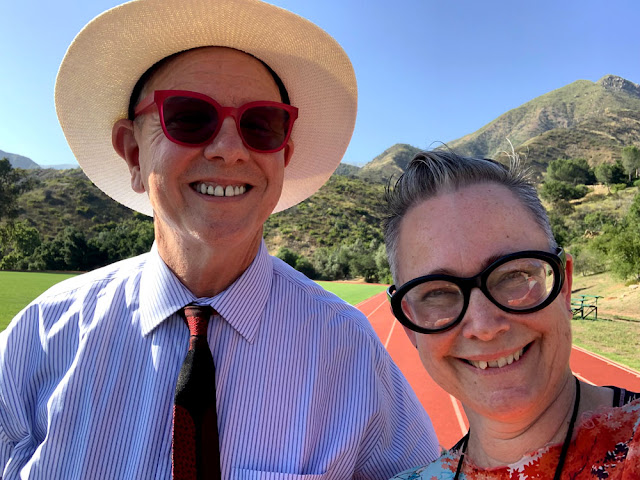 Carmaig and I overnighted at his mother-in-law's home in Montecito. I took him to LAX the next day. I might go more into intersections and connections with Carmaig's family (because there are connections with his wife Diana too!), but that's enough for now. I gotta pack for my own high school reunion, I leave tomorrow AM!

Going on any road trips this summer? Did one in the past?
Link it up on my Summertime Link Party! I think I'll extend it to ALL SUMMER!


Doing my own linking with
Patti's Visible Monday
Shelbee's Spread the Kindness
Catherine's #shareAllLinkup
Posted by Anne M Bray at 11:15 AM

I was linking up old Summer-themed posts to this month's Link Party (see below to add yours) and a few of the posts that came up were a Summer Goals link up from two years ago (it went on all summer. Here's the August  2017 wrap-up post). What's kind of eerie is these copy/pasted goals (in green) work equally well for me now (with only one item deleted that is no longer viable and some new additional Daily Goals).
Is that good or bad?
Daily Goals (new):
Do a Daily Drawing.
Create a new Waterlogue from old road trip photos.
Post a piece of art on Saatchi Art.

Summer Goals:
Get taxes done.
DeClutter the living room (again).
Get sewing machine repaired. (how many years has this been broken now?)

Do you have any sort of "To Do" list for Summer? Or maybe a "Honey Do" list?
I'll report back at the end of the month, progress or not.

Get out your summertime gear and get linking!
(not just outfits -- anything summery is encouraged)

I have achieved a new high of visibility. And I coordinate with this painting by Raffi Kalenderian perfectly:
Rafi's show at Susan Vielmetter is a riot of color and pattern. Like me!

I loved how this room was hung:
Check this out.
Painting on left:
Painting on right:
Do you see what he did? Look in the mirror!

I cruised the galleries in Culver City with Lani, Dean, and Judy on Saturday.
We had a great day. Will post more images on my art blog, later.


I'm looking forward to a trip east in 11 days (but who's counting? Haha).
I'm still trying to figure out how to get from Providence RI to Vermont. (Renting a car).
I'm also supposed to finish an oil painting that I haven't started. (Sigh).
Nope. My recipient made the fatal mistake of saying "don't worry about finishing the painting".
Does doing a Waterlogue count? No.
Get out your summertime gear and get linking!
(not just outfits -- anything summery is encouraged)

Linking up with
Shelbee's Spread the Kindness
Catherine's #shareAllLinkup
Posted by Anne M Bray at 7:15 AM